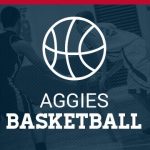 Despite Darius Lopez putting 25 points on the board Saint Agnes lost to Minneapolis Roosevelt 57-48 in the section 4AA semifinals. Both teams were very physical on the court with Roosevelt picking up 21 fouls while the Aggies had 22. Lopez shot 8 for 19 from the field while sinking 8-15 from the free throw 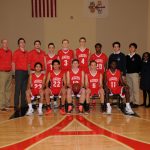 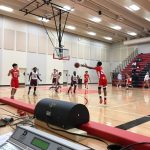 The boy’s basketball team earned the 6th seed for the upcoming section 4AA playoffs. They will host the 11th seed Math and Science Academy next Thursday, March 9 at 7:00 pm. The winner will face the winner of the New Life (#3) vs. Charter Stars (#14) on Saturday March 11, 7:00 at the higher seed. 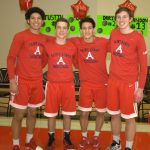 Saint Agnes picked up a big section win today when they defeated St. Paul Academy 58-47 on Senior Night in Bandas Gym. Brandon Plasch led all scorers with 19 points, 12 of them in the first half. Darius Lopez added 15 and Marcus Johnson scored 10. The Aggies finished the game with 26 rebounds (4 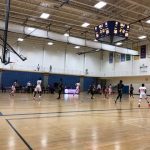 St. Agnes defeated St. Paul Washington 74-66 on Monday with the help of Gary Smith, who scored 32 points. St. Paul Washington heated up during the second half, but not enough to reverse the early lead of Aggies. St. Agnes played an aggressive game, racking up 28 fouls during play. Smith was on the ball for St. Agnes, making 59% (13-for-22) 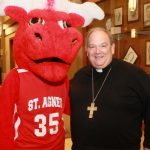 Archbishop Bernard Hebda stopped by near the end of the Saint Agnes vs. Concordia Academy boys basketball game Friday night in Bandas. The Aggies treated the Archbishop to a 59-43 Tri-Metro conference win.

Saint Agnes picked up a big Tri Metro Conference win Friday defeating Concordia Academy 59-43 in Bandas Gym. The Aggies were lead by Darius Lopez, who scored 19 points. The Aggies scored early, claiming a 28-14 lead at the half. Saint Agnes’s Lopez hit 8-for-14 (57%) shots from the floor. Two other players also added ten or more